You are here: Home › Helix › How to Open a Hole In Your Home

Home Automation with Security would have you believe that this is a pony; 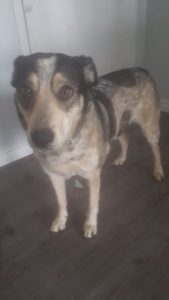 This is a dog;

And really, it has you believing it. Until you don’t; 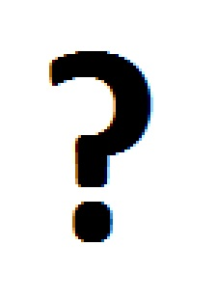 If you’re confused, you’re not alone. Home alarm shopping has gone from simple, to a Dog and Pony show. As always, we can answer your questions through our questions section or Facebook page to the right, or through the contact us section of our webpage. Feel free to use those at any time.

For a more technical guide to buying alarm systems, check out this link.

Let’s see if we can’t clear up where Home Automation came from, what it actually is, and why real security company’s took so long to get involved.

Home Automation is a product of a torrid love affair between Home Security and Appliances. Except not really. It was more like an arranged marriage where developers needed to find the most readily available way to tie devices into an already existing network of connections. Home Alarms, already installed in many homes, made the most sense. 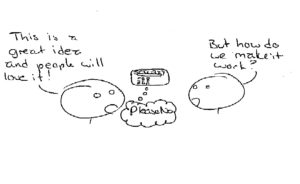 Despite the protests of security systems everywhere, the marriage happened. But it was like squeezing a square peg into a round hole. 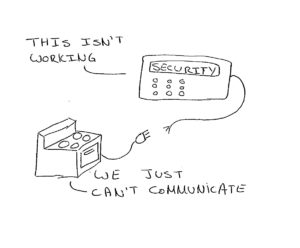 Therapy was attempted, with limited success. 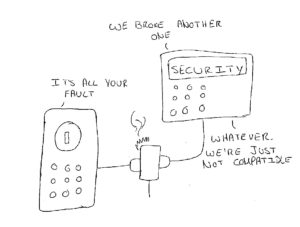 The real problem was that there was no reliable way to make the appliances and security systems compatible on a large enough scale for the mass market. So in most cases, divorce occurred.

Thing is, Home Automation was a fantastic idea and no one was ready to give up on it yet. With the existing products largely eliminated as connectivity methods, engineers got down to work on something new.

See, if you can’t connect something with a wire but you still need them connected, your only option is wireless. But existing wireless protocols were much too high powered to allow devices to run for long without a battery change, and it was unfeasible to ask an end user to change a battery every couple of weeks just to let them turn on their stove from Australia. So they improvised.

The idea of low power wireless connectivity was born, and multiple development companies went to town on it.

Now, anytime there is a race to get something to market, speed is almost always the deciding factor in what gets used and what doesn’t. 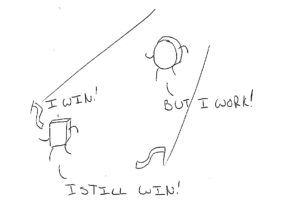 With the race won, mass production began. And so did mass marketing.

Of course, as we all know, when you rush something you always make concessions in quality. In this case, the network connectivity that was used for these new Home Automation control systems made a concession everyone figured out quickly. Encryption.

Encryption is the thing that stops outside forces from getting into your network and doing nasty things to your electronics. Like turning them off or disabling them. Even reprogramming them or destroying them entirely. The connection used in these new systems was capable of heavy encryption, but in the name of compatibility and deployment speed, the lowest standard of encryption was set to… plain text. 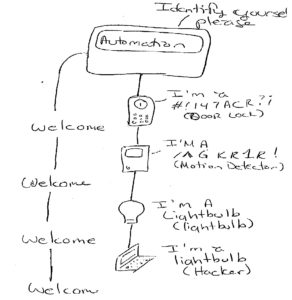 That’s right. Something as simple as a light bulb replaced in your bedroom is enough to open a hole in your security if you aren’t careful.

And once you’re tied into this home network, you have access to everything also connected to it. There’s a link at the bottom of this article for a study that illustrates this beautifully.

Why does it open you up? Because most low power wireless connections look like this; 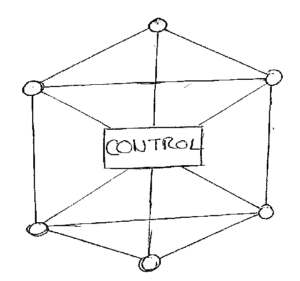 It is, quite literally, a miniature web of wireless signals in your home. Consider that all nodes are 128 bit encryption. It’s pretty secure.

Now consider that one of those nodes (device, appliance, what have you) needs to be replaced; 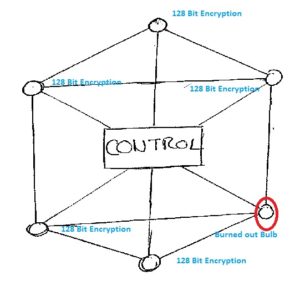 Simple enough. Go out and buy a bulb. So you do. Except in all likelihood, your once secure network looks like this; 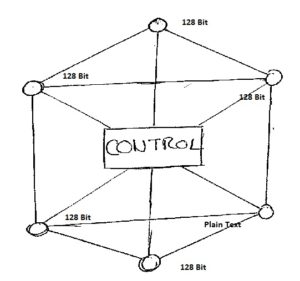 Uh oh. On a wireless system that doesn’t operate on line of sight this isn’t a big deal. But in a line of sight system where all devices communicate their own encryption and the control simply verifies it… well… you just inadvertently punched a hole in your security.

When you hear about a major corporation being hacked, this is the type of hole the attackers are looking for. And find.

It’s kind of a big deal that someone could, potentially, turn off your lights or turn on your stove. Maybe even turn up the heat on your thermostat. Creepy. Intrusive.

It’s even a bigger deal if you’re home security is tied into THE SAME NETWORK. Potentially, a hacker could turn off your home alarm as well. They could even watch through your cameras without you having any idea they’re doing it, knowing exactly when you’re home and when you’re not.

Home Automation IS AN EXCELLENT IDEA

Rather, I should say Home Automation IS AN EXCELLENT IDEA IF DONE CORRECTLY AND IF YOU USE IT.

I know more than a few people who have little stand-alone devices in their home. These gadgets looked new and shiny on the shelf, and they swore up and down this was going to change their life.

Except it didn’t. Most of them sit around gathering dust. It’s not that they don’t work, it’s that they get forgotten. Funny how the bells & whistles on new and shiny devices are so popular early, but fade so quickly like the gimmick they mostly are.

In the end, a security system is meant to keep you secure. The more accessible and convenient you make it, the less secure it becomes. Done right your security and home automation can work together to keep you secure, while making sure you have all the abilities electronic integration can give you.

Things to Think About

What is the Standard Encryption on the Devices I’m Buying?

Ask. Read the package. If it’s not clear just how secure your home security is keeping you, don’t buy it.

Is Remote Home Control Something You Would Use?

If your answer is “I think so”… you probably won’t. Remember that every single one of the remote features you add to your alarm system comes at an extra cost. There is no way around that. Apps take licensing (cost), websites require hosting (cost), and software requires developing (more cost).

In fact, if you currently have an alarm system which you can control from your smart devices, pull out your bill. Look at the features. Then be honest. How much of that are you actually using?

Remote Home Control and Self Monitoring Are NOT the Same Thing

They’re not even really comparable.

It’s 3 am, you’re out of town and your basement is flooding. Your phone is filling with email and text alerts telling you you need to do something. But you’re still sleeping.

Or playing baseball. Or at work. Or otherwise indisposed. No one is responding and by the time you see the messages your basement is under 4 feet of water.

It happens more often than you think. Some of our customers pull off self-monitoring like pros. But most? Most go 24/7 professional.

What Parts of Home Automation Would You Actually Use?

This is the big question, and one you may not know the answer to until you start integration.

So What is The Myth of Modern Home Alarms?

Home Security Systems are the grandparent of Home Automation, this is true. Being related and being the same thing… that’s a different story. You can run Security and Home Automation through the same control panel, this is also true. But this is where the waters get muddied and the Myth begins.

Home Security does not add convenience to your home, and it’s not meant to. It’s an obstacle. An obstacle you can control, and no one else can.

Home Automation adds levels of convenience to your home, but it should never be combined with your security applications. There may be people out there who enjoy making it easier for burglars to get inside their home undetected, but if you’re reading this you aren’t one of them.

For more tips on how to cut through the fluff, check out this link.

And here’s the study on security encryption: Study