You are here: Home › Helix › The Alarm Network – Telegraph

So a long time ago, in a galaxy not so far away, there was something called a burglar alarm. It was created to help home owners do things like secure their homes from burglars, and it looked like this;

And they worked. Well. With police in short supply and criminals all over the place (this was in the 1800s) it was all home owners could do to add that level of protection they needed to stay secure.

It wasn’t long after the installations started that telegraph/telephone lines started to be used to monitor the systems from a central station. A city was divided into districts.

Say the square is New York; 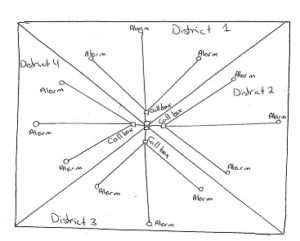 The bells for each system would ring in multiple houses, so everyone knew when a response was needed. The group of houses was assigned to a district, and when an alarm was received a messenger boy was sent to the appropriate district.

That’s why they called it American District Telegraph. ADT. Yeah. I didn’t know that either. We don’t use messenger boys  (and as far as I know neither do they…anymore).

Point is, even way back in the good old days, everyone understood the importance of alarm system responses. Society was much much different back then, as was technology, but having attention paid to an alarm from someone not within earshot was considered a must have.

Nowadays, when an alarm is triggered on a system tied in to our central monitoring station, our computer receives that alarm code almost instantly. We know where the system is, and what zone was triggered. We get the ball rolling on response within seconds of receiving our first signal.

But at it’s core, professional monitoring still operates on the same principles as those old systems of days gone-by… receive, respond, assist.