You are here: Home › Locks › Start Here › The History of Locks

So. We’re gonna start here, because it makes the most sense to start at the beginning.

Note to the reader:

This topic is huge. Massive even. I’m going to do this in parts, or no one would see me for about a month.

While we should note that the earliest example of a lock and key mechanism was discovered in Nineveh, Assyria, and is expected to be between 5-6 thousand years old, there really isn’t any way to know whether it was the Assyrians, Egyptians, Babylonians, or something(one) else that actually invented it.

Just like now, technology was often stolen/traded/shared between the populaces and because these regions of the world existed for so long, splitting hairs on who the “first end user” was is an act of futility.

Back in Mesopotamia, in the days of Ancient Egypt, some ridiculously inventive human being (or alien, if that’s your thing) came up with the idea of the millennia.

Create a device that only opens if you have a special tool to open it. It would have 1 or 2 brackets on the wall beside the door, and one or two brackets mounted to the door itself. The brackets would be aligned to allow a wooden bar, or bolt, to slide through. That bar would lock into place on a number (3) pins installed in the end most bracket mounted to the wall.

Looking at the picture, the first thing you notice is the lack of springs, meaning there was no downward pressure forcing the pin into the bar.

Before I go any further, I have to give the Mesopotamians their props. Modern locks look like this; 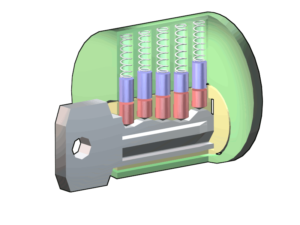 As expected for a first attempt, it had it’s flaws.

The 3 pin drawback was probably not the problem then that it would be now. Few of those alive back then would have figured out what the key actually did to the lock to make it turn, making picking a rare skill.

A wooden lock wouldn’t happen now. Not on any serious level. Egyptians/Assyrians would have used wood for it’s availability, not it’s durability. After all, if you hit a wood lock hard enough it’s not going to put up any real resistance, and because the doors were made of either stone or wood the lock would be the logical attack point.

The locks themselves were massive, sometimes over 2 feet long.

Remember that the most reliable way to lock a door is to put a bar across it. Bars, however, can simply be pulled out if the lock is on the outside of the door, meaning that up until this point in history doors could not be locked from the outside.

This was a problem.

We know, after a few thousand years, that the greatest use for a lock is to keep people out while you are not there. Having a lock that only works while you are inside the house doesn’t allow for that.

In order to get around the bolt problem, this little mechanism;

Was put in the end of this bar;

Most locks weren’t long, like the one sketched above, but as mentioned earlier the longest ones were up to 2 feet. The majority were shorter.

It wasn’t until Rome that locks started to be mounted into, instead of onto, doors, but that’s another article. Interestingly enough the Roman locks were also significantly easier to defeat than the Egyptian locks were, and the Greek variants were even easier than that.

I’m not sure locksmithing was a term the ancient Egyptians had a word for, but they should have. A 5000 year old design that is still the basic idea for what we use modernly is kind of awesome.