You are here: Home › Uncategorized › Yale vs Alarm Lock Grade 2

So. There’s this not-so-new guy back in town called Alarm Lock. We had a visit from a rep today with one of their grade 2’s in tow. 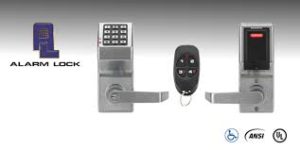 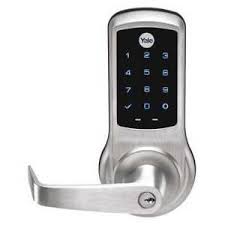 Everything else aside, here are your two biggest differences that aren’t entirely cosmetic.

Touchscreen locks come with two benefits. The first is that on a touchscreen, the button labelling won’t wear off. You can push that screen as many times you want and the back-lit display isn’t going to rub off. The Yale in particular does a good job of making sure it’s numbers are plainly visible, as opposed to a grade 2 Schlage I also saw today that put it’s numbers on a white background.

A white background is a bad idea. A very bad idea.

The issue with a back lit touchscreen is that it can washout in direct sunlight. Solution; stand in front of the lock when you punch in the code. To me, it’s a very small issue that’s easy to work around.

The most useful application for raised buttons is in regards to the vision impaired, not because buttons are easier to see, but because you know where your hand is on the keypad, making the need specific to the user.

The fob that comes with the DL2700 solidifies it as a better option for stand alone doors.

The only way to get the NTB620 to respond to a remote opening is by connecting it to a hub and using one of the many apps intended for home automation. By including a remote fob with their lock, Alarm Lock made themselves a more viable single door solution.

The fob can lock, unlock, and put the DL2700LD into it’s lock down state.

Mind you, if you are doing a set of networked locks this fob thing isn’t a big deal at all. Any phone or computer tapped into the lock network is used in place of the fob. The fob is also capable of enrolling in up to four different locks.

Remote unlocking goes to Alarm Lock, if only because they included the ability for RF communication without the need for a wireless/bluetooth card.

Seems cosmetic, until you try to install them.

Here’s the thing. The rounded design on the NTB620 increases the difficulty of install by quite a bit. The reduced room inside makes connecting the wire from the motor to the keypad a bit of a chore. We’ve had at least two installs where the wire got pinched in a mechanism.

Those were early installs and it hasn’t happened since.

Again, cosmetically the NTB620 is more attractive next to the clunkier look of the DL2700, but I think the DL2700 wins this one on the functionality side.

The Yale wins. It’s not close.

Look, the NTB620 (Grade 2) and all of it’s Grade 3 counterparts have the market cornered in voice feedback. Every single one of these locks speaks clearly and reliably, making a programmers job much simpler and never leaving any question of what button comes next.

Alarm Lock uses the old “bleep-bloop-bleep” sounds. As clearly displayed by Yale, that is no longer the way to do it.

The reality is, if you are automating or using a lock for multiple users, audio feedback is stupid important to the end user. I wish more electronic locks would get with the program.

We already know the NTB620 is fully compatible with both small and large format cores for almost all manufacturers. That’s one of the major differences between it and it’s grade 3 siblings.

At first glance it doesn’t look like the DL2700 is as flexible, but I have no way of confirming that without getting a display model or having someone from Alarm Lock let me know which they have not.

The DL3200 is the audit trail version of the DL2700, and in a place where you need 251-2000 codes, it becomes your only available solution outside of full card access.

Alarm Lock wins, although most of us don’t need 2000 codes so…

All of this aside, when it comes to operational variances Alarm Lock is number 1. There are so many different functions for the various sku’s of this Trilogy line of locks that there is quite literally something for everyone, but there is no one-lock-to-rule-them-all.

The Yale line is more linear and streamlined. They have built everything they intend to do into the same lock structure and you use whatever you want out of those options.

This is a toss up. Either way is fine with us.

We’re not going to carry the Alarm Lock in stock, simply based on the number of versions we’d have to stock. We will, however, be providing them as an on order alternative just in case we need some more specific functions.

This isn’t everything, but it’s everything that matters to most of our customers. We’re gonna have to talk to get more specific.

It’s a wash. Which one you want will be controlled by what you want the lock to do.

Call us. Do your research. Message us online. Let’s figure out your solution.