You are here: Home › Helix › Start Here › Being Smart with Smart Devices 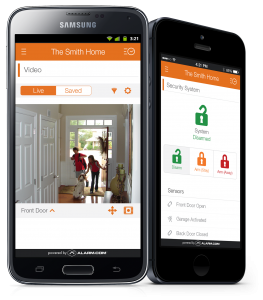 Our lives are busy, of that there can be no doubt. Between work, social media, kids, relationships, education… no matter what it is it all comes down to the same thing. Our time is not our own. And even when it is, we don’t feel like it is.

Most of us consider our smartphone our greatest time saving device. It’s our personal assistant, our daily planner, our conduit to the world. It makes sure we never miss a message, never don’t see a picture, and always know exactly what we can do and when we can do it.

We can ignore it, but typically we don’t. Personally, I turn mine off at least once a week. Conduits stay open only to my most important relationships and the most urgent of situations, and from what I understand most of my most like-minded friends do the same. Scientists have been tying things such as anxiety and depression to overuse of social media and electronic communication. Web Md quoted a researcher saying;

For a company like H&B Security, on the cutting edge of home and business security technology, this presents an interesting dilemma. We want you to use your phone, internet, social media to improve your security. But we want it to be a comfort, not an anxiety.

A BBC Article once put up a quote that resounded with me;

But in the era of what management consultant Peter Drucker called “knowledge work”, that’s changed. We live in an “infinite world”, says Tony Crabbe, author of the book Busy: How to Thrive in a World of Too Much. There are always more incoming emails, more meetings, more things to read, more ideas to follow up – and digital mobile technology means you can easily crank through a few more to-do list items at home, or on holiday, or at the gym. The result, inevitably, is feeling overwhelmed: we’re each finite human beings, with finite energy and abilities, attempting to get through an infinite amount. We feel a social pressure to “do it all”, at work and at home, but that’s not just really difficult; it’s a mathematical impossibility.

It’s a hard fact that the larger media and electronic conglomerates want you to ignore. It’s an accessible world, and the social pressures to fall into it’s traps are encouraged by society. Taking care of yourself has become a catch phrase rather than an action we actually take, mainly because when we do we are afraid of the repercussions from our friends and, sometimes, family.

That, and FOMO. It’s called Fear of Missing Out. And it has been created for you, not by you.

If you don’t know that name you aren’t alone. Neither did I until I started researching the impact of accessibility on our mental condition.

Mr. Keynes predicted that the digital age would bring an abundance of free time, as people struggled to find things to do. Many people would tell you he was wrong. I am going to tell you…he was right. Sort of.

Busy and Leisure are the Same Thing

Yes. Yes they are. Don’t tell me they’re not. They are. And I’ll tell you why;

The number of things we rely on our mobile devices is massive, but the number of different things we use our phone for is even greater. Those millennials who are walking around with their nose implanted in their screen could be doing anything; playing a game, on Facebook, researching school work… we just don’t know.

In other words if you say you don’t use Facebook, you’re probably not telling the truth. (FYI, Instagram is light years behind Facebook in usage. Facebook is not just for old people. Numbers don’t lie).

Us older folks actually don’t seem to use social media as much. Our communication methods are refined and usually more based around privacy.

With so much competing for your attention it’s easy to get separated from the other important things that keep your life uncluttered and uncomplicated. Having a few of these things around us are important to our mental well being and our ability to take those important tasks and compress them into an easy button push.

I’m going to share a secret with you. I did a lot of research for this article. Part of what I wanted to do was meet as many people who identified themselves as anxious or prone to depression as possible.

Now let’s be clear. In no way were my interaction with them totally informational. Some of them were fantastic people that I really really like. But what started me on this road was the desire to know why people feel so busy, and there is no better place to start than those who feel their mental well being is at risk.

I’m part of the “single guys over 35” world, so this was actually pretty intuitive. There is no better place to go to find people who want your attention than… that’s right. Online Dating Websites.

Note: This is only part of the reason I was there. It was an interesting experience that actually got me some interesting contact with some really interesting people. Some I’ve met, some I haven’t had the pleasure yet. All of them (if they’re still around) are there because I like them.

It wasn’t just dating websites I used. Anywhere interaction happened online, I looked. And I’ll tell you. The experience was phenomenal and eye opening.

Why Apps Are So Important

Until I experienced a good old fashioned online persona fest, I had honestly thought apps were just for lazy people. The thought that we needed reminders from a mobile device to make life work properly was insane to me. You can’t possibly be that busy.

The truth is, that’s true. We’re not busy. At least, not in the traditional sense. But as already mentioned, we’re busy in ways that we’ve never been busy before. Someone said yesterday that “Posting a Food Pic on Facebook would be like calling all your friends just before you ate your dinner to tell them what was on your plate”. Absurd right? Except it’s part of busy now.

Did you know an app was just released to remove the work from figuring out how to make the dish shown in a food pic? MIT. Yeah. Wow. I’m speechless.

Anyways, back to the online personas.

Online anyone can be anyone. Conversations are easy and intuitive. Disappearing is simple and coming back is like a parade. You never have to compete for anyone’s attention because, quite literally, anyone will talk to you.

If you ever want to feel busy, or wanted, or desirable, or like a complete king of the world, go online. Pick up a dating app. It was heaven.

Millennials. 50 year old business people. 30+ year old single moms and dads… I get it. Keep going. I don’t know why the majority of you are there, but man. I like it. I doubt I’ll use one again, but I liked the attention.

But it wouldn’t work at all without the app. These people have private lives and often things they don’t want made public. Creating a private app that honestly announces itself whenever you have something to see is what makes the whole other-world possible. It takes absolutely no effort to be private through an app, where social media has many slippery areas you have to be careful with.

Which Brings Me To My Point

While I was on the dating sites, and various online social areas, I made a discovery;

Every single one of these people identifies as having some sort of anxiety or depression. The app is where they feel comfortable.

Why is that? The answer varied in explanation, but always came down to the same thing;

“I have choices. There’s no pressure. And truly, I feel as if I’m in control.”

And I like it. The reality is that apps bring us control of our busy, or busy-leisure. Apps bring us updates and reminders and there is no important social pressure to overwhelm you, aside from what we generate ourselves.

So if a dating app can help ease the tensions of someone with anxiety, what can a security app do to ease your concerns about your home?

The Answer: A Heck of a Lot

While many people are not clinically anxious or depressed, we do have things that make us anxious and afraid of depression to the point where we push ourselves to stay active and busy enough to not have to deal with the guilt of failure. We don’t all want absolute control and we all enjoy our freedom.

Keep in mind that the things that mean the most to you will always make you anxious. There is no cure. But there are remedies that make it easier to manage that tension.

I believe this is what our long term monitored alarm customers figured out long before there was ever Facebook, before smart devices or dating apps. Knowing they would get a call from us should anything ever happen at home while they were away brought them that level of comfort they sought, and that trust they placed in us still exists today.

And just like dating anxiety, Security anxiety can be remedied by using the same Smart Devices to send you updates whenever something happens at home. It won’t look after your kids for you, but it can help you make sure they are home safe and protected. It won’t make sure no one is entering your home without your permission, but it will make sure you know if they do. And it won’t keep you from going out on a date with a bad person, but it will make sure you’re protected if you do.

It means that not only is your Smart Phone a great time saving device, but if you let it it can also help you worry about much less than you already do conveniently, and without intruding on your busy-leisure.

Give us a call. Let’s get started on getting you started.

182 Responses to “Being Smart with Smart Devices”